Shared by: Anahi Alcockson from AMAZON
Share
Over 192 suppliers can give you a quotation.
Get Quotations Now
You should get the quotation(s) in 7 hours .
Related Products from Alibaba Introducing the 1/24 scale Peugeot 307, which has shown great performance at this year's World Rally Championship. Model accurately depicts flowing coupe-style body lines and rear spoiler with vertical fin, as well as interior packed with racing equipment.About the Peugeot 307 WRC Monte Carlo '05Introduced at the 2003 Frankfurt Motor Show, the Peugeot 307 took over from the 206 in World Rally Championship racing in 2004. Based on the high-end 307 CC (Coupe-Cabriolet) version, but with fixed roof and front, transverse-mounted 2.0 liter 300hp engine, Peugeot has produced a worthy successor to triple world champion 206. A notable difference with the 206 is the rear, transverse-mounted 5-speed gearbox, in contrast with the 206's longitudinal one. The 307 took some time to come into its own during its first season in 2004, winning only one round in Finland. The 2005 season has been a hard-fought one as well, with Peugeot 307 driver M. Gronholm taking three 2nd place finishes and winning the Finland Rally. Peugeot is currently running neck-and-neck with fierce rival Citroen for top spot in the Manufacturers Standings, and with both teams ending WRC involvement this year, the remaining 6 rallies are sure to be packed with nail-biting excitement!About the Model * Display quality 1/24 assembly model of the Peugeot 307, at the 2005 WRC Monte Carlo Rally, accurately reproduces sleek coupe body lines and large rear spoiler with vertical fin. * Diecast lower chassis for enhanced weight and realism. * Kit includes mesh cover for front hood air outlets. * Metal transfers reproduce side mirrors and rear Peugeot emblem. * Includes 2 sets of high quality decals to reproduce No.7 M. Gronholm or No.8 M. Martin. * Use with Peugeot 307 Photo-Etched Part Set (sold separately) to increase the detail. 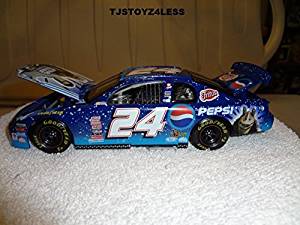