Shared by: Shelby Cleghorn from AMAZON
Share
Over 33 suppliers can give you a quotation.
Get Quotations Now
You should get the quotation(s) in 5 hours .
Related Products from Alibaba The Cavision Next-Generation Slate with LED Light, Black & White Clap Sticks is an updated version of the classic, film set, clapper slate. Clapping sticks provide simple and virtually foolproof visual and audio sync points when using a separate audio device to record audio (double system sound). The slate incorporates an LED light unit that illuminates the film title/production name section of the slate.It features black and white swatches on the clap sticks, a pre-printed acrylic face to use available dry erase markers on and an ABS resonance chamber on the back that amplifies the bang of the clap sticks closing, which is useful in noisy environments. The chamber also provides support to the slate itself, making it sturdier.The slate's latch system holds the sticks closed, so they don't pop open when you are carrying the slate in between shots. The latch also means that you no longer need magnets and a stiff hinge to hold the slate closed, allowing the slate's single bolt hinge to provide free movement. A slot incorporated into the back of the slate provides a convenient way to hold the slate during operation. The slate is suitable for use on set or as a presentation item to the filmmaker when the film is done shooting. 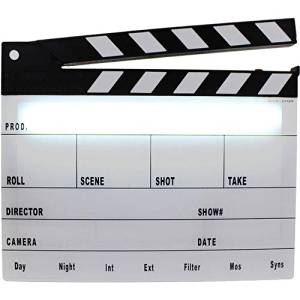