Shared by: Shaylin Cleather from AMAZON
Share
Over 145 suppliers can give you a quotation.
Get Quotations Now
You should get the quotation(s) in 6 hours .
Related Products from Alibaba GI JOE is the code name for America's daring, highly trained special mission force. Its purpose: to defend freedom and justice against COBRA®, an evil organization determined to rule the world. The GI JOE team is made up of experts in different disciplines who fight for freedom wherever there's trouble-on the land, on the sea or in the air! STEELER comes from a blue-collar middle-class background. He put himself through college on an ROTC scholarship and by working as a heavy equipment operator. He entered Armor school at Fort Knox, graduating at the top of his class. One of the first to join the GI JOE team, he has taken part in countless operations against the COBRA organization. Coming from a background in which you proved your mettle through physical contests, he frequently challenges team members to tests of strength and stamina. GENERAL FLAGG is the son of the original GI JOE team commanding general. He is a graduate of the Virginia Military Institute, as were five preceding generations of Flaggs. GENERAL FLAGG believes a General should personally lead troops into a firefight, instead of sending out orders from behind the lines in some cozy commander's tent. When the call is given to charge, he's the one shouting it from the front. The only real rank that COBRA® OFFICERS have is over their own little squad of COBRA troops. They are among the meager handful from the teeming ranks of COBRA troopers that, for some reason, whether it's previous experience, personal ambition or dumb luck, manage to show some level of initiative, organization or leadership skills. Ultimately, somebody has to keep the ranks together and moving with a purpose, so that even these low-level COBRA forces achieve their given objective. 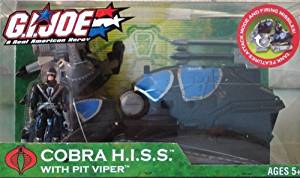