Shared by: Quinten Chalfant from AMAZON
Share
Over 1358 suppliers can give you a quotation.
Get Quotations Now
You should get the quotation(s) in 6 hours .
Related Products from Alibaba For twenty-five years, the heroic GI JOE team has battled the evil COBRA® forces with guns, guts and glory - and loyal fans like you have stood beside them every missile-firing step of the way. Your remarkable dedication to these courageous heroes and menacing villains has made GI JOE the unsurpassed icon of action and adventure that it is today. GI JOE has risen to the challenge for a quarter century, and will continue the fearless fight for years to come. YO JOE! Celebrate 25 years of malicious COBRA forces with this five-pack of articulated action figures. Each figure comes with a weapon and a display base, making it easy to display and add to your collection! Show off your GI JOE allegiance with the light-up GI JOE sign! Includes COBRA (The enemy), COBRA COMMANDER, STORM SHADOW, DESTRO and BARONESS figures with weapons and display stands. 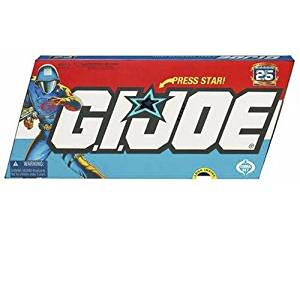