Shared by: Dominic Baddeley from WALMART
Share
Over 10 suppliers can give you a quotation.
Get Quotations Now
You should get the quotation(s) in 6 hours .
Related Products from Alibaba The Victorinox Swiss Army Classic SD 53039 Sterling-Polished Silver has the following unique features: 1. Blade 2. Nail File with 3. Screwdriver 4. Scissors 5. Key Ring In 1884, Master Cutler Karl Elsener started his cutlery factory in the small village of Ibach, Switzerland. In 1897, he crafted the Victorinox Original Swiss Army Knife. Since that time, the Elsener family has continued to craft tools in the Victorinox tradition of in genius design, durability, and quality. This is why all Victorinox multi-tools, made of first class stainless steel, are guaranteed a lifetime against defects in material and workmanship. REMEMBER, If it doesn't say Victorinox, it's not the Original Swiss Army Knife.

This Victorinox Swiss Army knife--released by the company that introduced the original Swiss Army knife in 1897--features the classic multitool design but with a modern twist. The device includes a knife blade, scissors, tweezers, a toothpick, a nail file with a screwdriver tip, and a key ring, but crosses things up by manufacturing the handle in attractive sterling silver with a white texture rather than the traditional red. The unique handle still contains the timeless Cross and Shield logo, but its fresh design makes it look completely original. The reworked device makes an ideal groomsmen's gift, keychain accessory, or upscale stocking stuffer. No hiker or camper should leave home without one.

All the tools on the SD Classic are made of 100 percent stainless steel, with rust-free aluminum alloy separators that keep the blades moving smoothly. The knife also features brass rivets and bushings that hold the layers together. The SD Classic measures 2-1/4 inches long, and like all Victorinox products, carries a lifetime warranty against defects in material and workmanship.

About Swiss Army Knives In 1884, Swiss cutler Karl Elsener set up shop in Ibach-Schwyz, installing a waterwheel in Tobelbach Brook to run his grinding and polishing machines. Thus began what would become the international brand name Victorinox, a combination of Victoria, for Elsener's mother, and "inox," or stainless steel. Today, Victorinox produces watches, luggage, clothing, and, famously, Swiss Army Knives. The original product dates to 1897, when Elsener patented the Swiss Officer's and Sports Knife he supplied to the Swiss Army. Following World War II, American servicemen and women shopping in PX stores shortened the name to Swiss Army Knife, which lives on in English-speaking countries around the world and has become a metaphor for versatility. 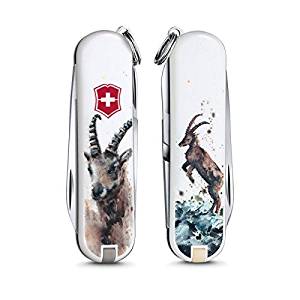